Since opening its 57,000 square foot manufacturing facility at 6645 Echo Ave. in Stead, which began operations in May 2013, Wasco has seen its West Coast sales climb from 1 percent of its business to 12 percent.

Reno is a “perfect location,” company CEO Jeff Frank said at the time of the expansion, because it is 900 miles or less from all major West Coast markets and is a transportation hub for that part of the country.”

Plant Manager Michael Jones, along with Jeff Binette, customer service representative, moved to Reno several years ago from Wasco’s headquarters in Wells, Maine, to get the West Coast facility rolling. Jones has worked about 10 years for the company.

Jones expects the Nevada plant, which currently employs 12 people, to slowly ramp up to be just as busy as the East Coast plant in Wells, Maine.

“I absolutely believe, and I’m confident, it will grow here like it did in Wells and will have the same success they have,” Jones said.

Founded in 1935 as a flashing company in Cambridge, Massachusetts, Wasco is the oldest and largest skylight manufacturer in the United States.

Since the recession, the company has enjoyed more than 60 percent growth.

The West Coast plant produces the same kind of home and business skylights as the East Coast plant, with one exception. The Maine plant has the equipment to manufacture enormous skylights that run the length of buildings.

“We’re not at that point yet,” Jones said. “We hope to have that (equipment to manufacturer giant skylights) out here, to be able to do that size too.” 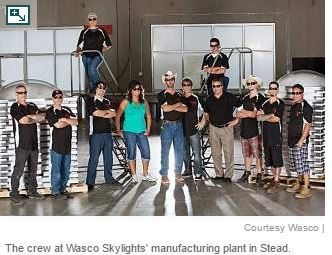