The Munson-Williams-Proctor Arts Institute’s Museum of Art was originally designed by world-renown architect Philip Johnson, one of the co-designers of the Seagrams building in New York city, once described by the New York Times as “the millennium’s most important building.” It was a ground-breaking design and the template for today’s modern skyscrapers, using an open concept and plenty of light. The Munson-Williams-Proctor Arts Institute’s Museum of Art was one of three Johnson-designed museum buildings that reflected Johnson’s developing personal aesthetic that wed International Style modernism to historical architectural references.

Having a building of such historical importance, the Museum’s facilities director, Ron Draper, was tasked with the responsibility of preserving all the original architectural elements from 1959 when the building was built, and the original Wasco skylights first installed. The ceiling was a tick-tack-toe style box of 121 individual panels, the skylights had to fit between, and would require some slight modifications in order to carry a greater snow load.

Due to the fragile and delicate nature of displaying and protecting valuable artwork, UV protection was absolutely necessary. The original skylights had no UV protection and required UV screen material placed over them to block the UV, but in doing so also reduced valuable light.

To further complicate matters, the museum was on an extremely tight schedule where all the construction had to be completed within a three-week period between major exhibitions.

The original Wasco units from 1959 were replaced with a thermally broken continuous vault system, glazed with OP3 UV absorbing acrylic which provided 92% UV blockage and much more daylight now that the UV screening fabric was no longer necessary.

“Due to the important historical nature of the project, we wanted to stay with the original manufacturer” stated Draper. “Even after 54 years Wasco’s skylights framing, and hardware were still in excellent condition; we were more than happy with the performance of the original skylights.”

“The new system,” said Draper “is airtight and completely sealed and didn’t require any condensation holes, providing much better thermal efficiency.” The skylights arrived in pre-assembled sections, which was a big-time savings and eliminated any need for cranes.

“Our Wasco rep, Rick Rollison of RISE Sales Co., and the whole team, mobilized very quickly. The process was both fast and flexible. The whole operation went very smoothly and three weeks later the job was complete, and more importantly preserved Philip Johnson’s aesthetic vision of grandeur that is the Munson-Williams-Proctor Arts Institute’s Museum of Art.” 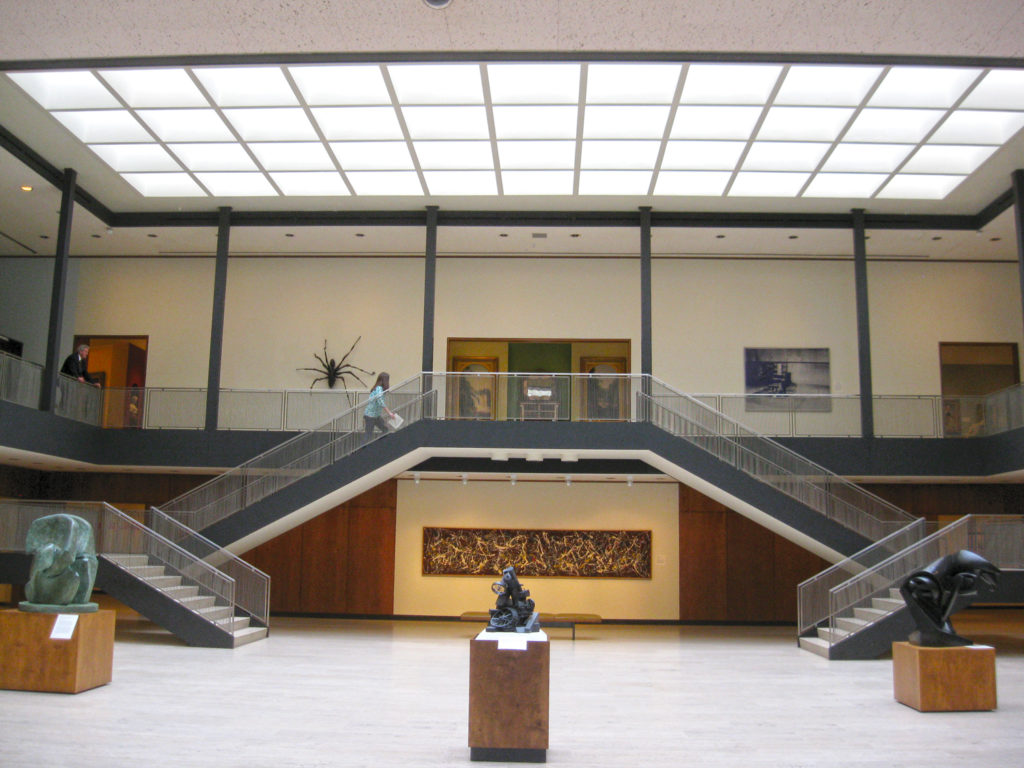 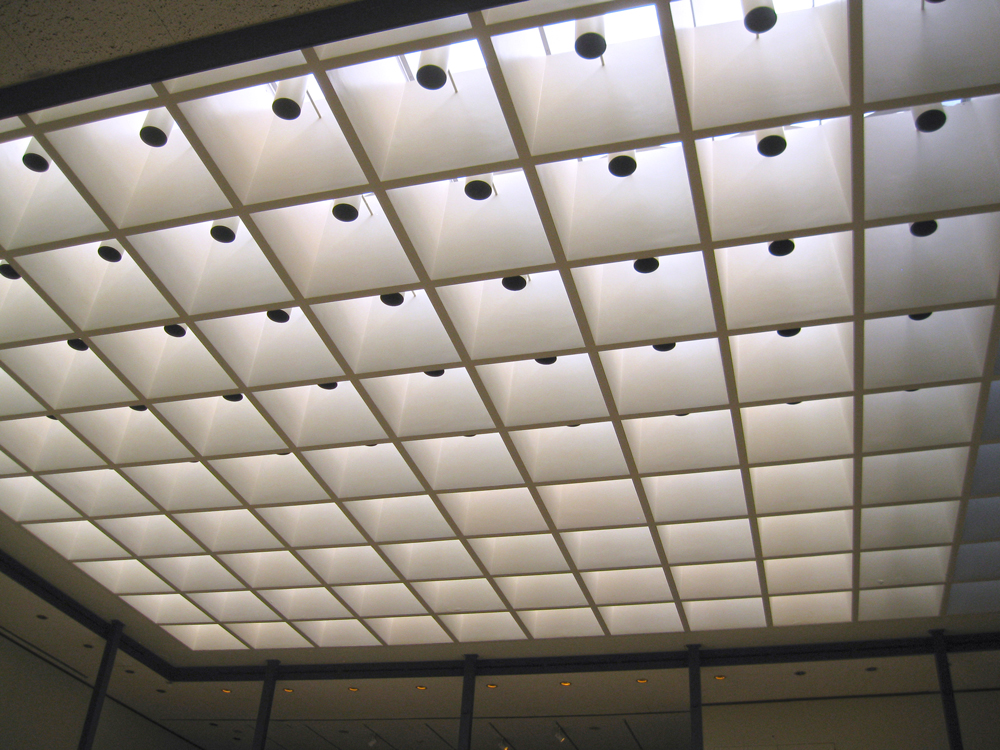 The skylight grid in the main atrium space of the Munson-Williams-Proctor Arts Institute in Utica, New York designed by architect Philip Johnson. 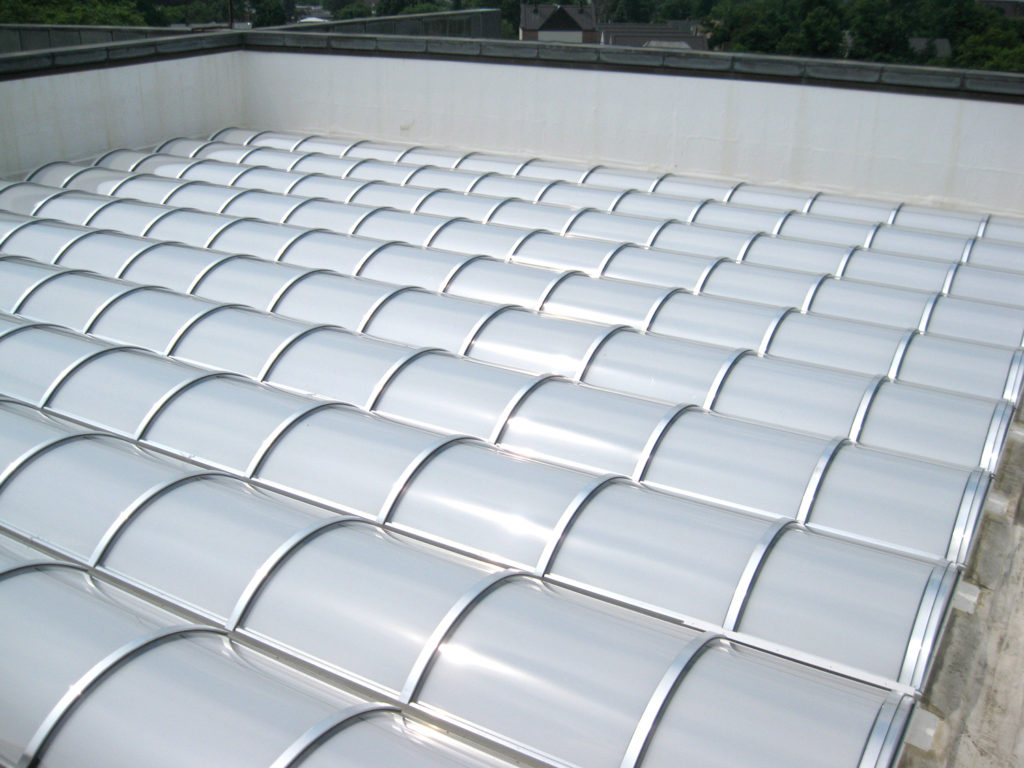 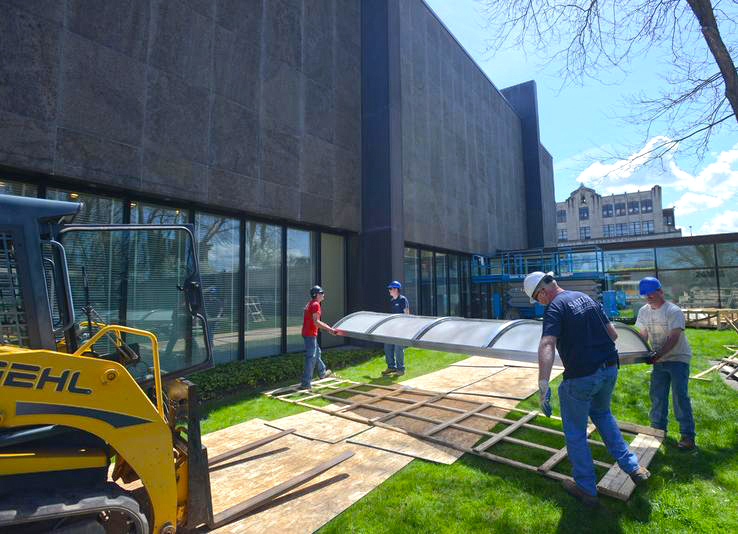